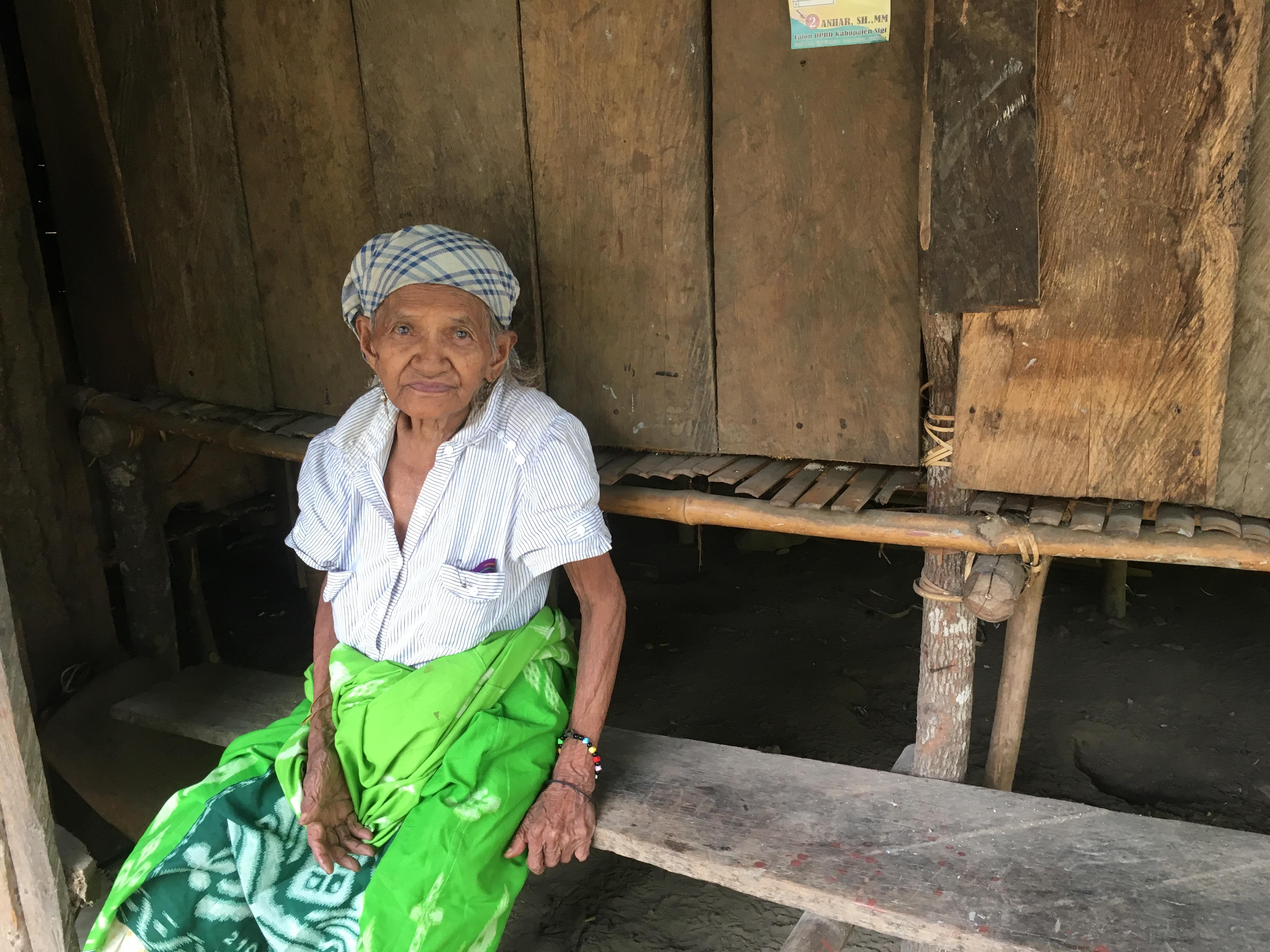 Cecilia Rose is a Programmes Officer at Age International. In Indonesia, she meets a 102-year-old great-grandmother who, during the 2018 tsunami, chose to stay home while everyone else evacuated.

Sari is 102 and the matriarch of her family. She is telling me how, last September, when a 7.4 magnitude earthquake struck her island, she was inside the house alone. As the building shook around her, she held on as best she could, hugging herself and praying to god.

Nurinia, Sari’s 67-year-old daughter, is also here with me today. She says she was cooking outside when the earthquake happened. She feared for her mother inside the building. Thankfully, they were both unharmed.

After the earthquake, Sari’s neighbours knew there might be a tsunami and evacuated up into the mountains. Sari and Nurinia’s family also fled – walking 3 hours in the dark to another village, where they could stay with relatives.

Sari and Nurinia did not flee to the mountains, or to to a neighbouring village. They chose to stay home.

The reason older people stay behind is complex and varied

Yes, they were scared of the water, Nurinia tells me. But they wanted to keep an eye on the house and the chickens. So, they ‘put their faith in god’.

Why did the women choose to stay put?

The answer is complex. It is certainly not uncommon for older people to stay behind in emergency situations. Some do it because they don’t want to be a burden on their families. During conflicts, some stay because it feels too late in life to start again all over again, with nothing.

Sari and Nurinia’s situation is different. I think they saw the decision as their duty – keeping the home ‘safe’ and looking after the animals was a way to support their family.

Staff in other disaster-prone countries have told me this is common – they remember similar things when they were children, grandmothers stayed home to protect the property from looting.

Had Sari and Nurinia wanted to flee, I wonder could they have physically made the difficult three-hour journey?

It was their choice to stay put – but the effect is the same either way. They were left alone, isolated, in danger – and potentially cut off from aid.

The importance of including older people in emergency response

At Age International, we often talk about older people being left behind during emergencies.

This has a two-pronged meaning. As we’ve seen, older people like Sari and Nurinia can be left behind in villages after everyone else has evacuated.

But – if we do not actively target people like Sari and Nurinia when we develop plans for emergency aid – then we, as humanitarians, also risk leaving them behind.

The teams that Age International work with on the ground focus on finding and helping the most vulnerable older people. In Indonesia, we are supporting YAKKUM Emergency Unit (YEU) to deliver age-friendly aid.

Sari and Nurinia, for example, have been given water filters, so that they have a supply of clean water for drinking, washing and cooking. This is particularly crucial for older people, who are more likely to die from diseases like cholera, and who are less able to travel to water sources, like wells.

Since the disaster, donations to Age International’s Indonesia appeal have helped thousands of older people to get health care, psycho-social support, walking sticks, glasses and more. Thousands more will be helped as we move into the next stage of the programme – long-term recovery.

For me, meeting Sari and her daughter has been a reminder of the complex decisions people make when disaster strikes. I am glad that our programmes take account of, and plan for, the people who stay behind.

Since September 2018 this programme has: